The Heresy of the Greeks Offers Hope

I asked a relative in Greece what’s it like over there now with the whole economic quake shaking things up. My aunt said, “Stavro, people are hungry. People are dying and people are killing themselves. The young, rich, educated ones are leaving and going to Australia and Canada. What can I say? May God have mercy on us.”

When Papandreaou was preparing to give the Greek people a referendum on the bail out deal, he was kicked out. Here, the birth place of democracy, the people were going to answer whether they would accept the IMF deal. The European Union leaders were in uproar. How dare the leader of Greece ask the people their opinion on what will happen to them? So, Papandreou has left and in his place we have econocrats in charge. Democracy was denied the Greek people.

Read this excellent article by John Pilger which gives an alternative to what we’ve been fed by corporate media.

The article is below.

In his latest column for the New Statesman, John Pilger inverts the perception of Greece as a “junk country” and sees hope in the uprising of ordinary Greeks protesting against the “bailout” of an economy plunged into debt by the tax-evading rich. Greece, he writes, is a microcosm for the developed world, where class war are the words seldom used because they are the truth.
As Britain’s political class pretends that its arranged marriage of Tweedledee to Tweedledum is democracy, the inspiration for the rest of us is Greece. It is hardly surprising that Greece is presented not as a beacon but as a “junk country” getting its comeuppance for its “bloated public sector” and “culture of cutting corners” (the Observer). The heresy of Greece is that the uprising of its ordinary people provides an authentic hope unlike that lavished upon the warlord in the White House.
The crisis that has led to the “rescue” of Greece by the European banks and the International Monetary Fund is the product of a grotesque financial system which itself is in crisis. Greece is a microcosm of a modern class war that is rarely reported as such and is waged with all the urgency of panic among the imperial rich.
What makes Greece different is that within its living memory is invasion, foreign occupation, betrayal by the West, military dictatorship and popular resistance. Ordinary people are not cowed by the corrupt corporatism that dominates the European Union. The right-wing government of Kostas Karamanlis, which preceded the present Pasok (Labour) government of George Papandreou, was described by sociologist Jean Ziegler as “a machine for systematic pillaging the country’s resources”.
The machine had infamous friends. The US Federal reserve Board is investigating the role of Goldman Sachs and other American hedge fund operators which gambled on the bankruptcy of Greece as public assets were sold off and its tax-evading rich deposited 360 billion euros in Swiss banks. The largest Greek ship-owners transferred their companies abroad. This haemorrhage of capital continues with the approval of the European central banks and governments.
At 11 per cent, Greece’s deficit is no higher than America’s. However, when the Papandreou government tried to borrow on the international capital market, it was effectively blocked by the American corporate ratings agencies, which “downgraded” Greece to “junk”. These same agencies gave triple-A ratings to billions of dollars in so-called sub-prime mortgage securities and so precipitated the economic collapse in 2008.
What has happened in Greece is theft on an epic, though not unfamiliar scale. In Britain, the “rescue” of banks like Northern Rock and the Royal Bank of Scotland has cost billions of pounds. Thanks to the former prime minister, Gordon Brown, and his passion for the avaricious instincts of the City of London, these gifts of public money were unconditional, and the bankers have continued to pay each other the booty they call bonuses. Under Britain’s political monoculture, they can do as they wish. In the United States, the situation is even more remarkable, reports investigative journalist David DeGraw, “[as the principal Wall Street banks] that destroyed the economy pay zero in taxes and get $33 billion in refunds”.
In Greece, as in America and Britain, the ordinary people have been told they must repay the debts of the rich and powerful who incurred the debts. Jobs, pensions and public services are to be slashed and burned, with privateers in charge. For the European Union and the IMF, the opportunity presents to “change the culture” and dismantle the social welfare of Greece, just as the IMF and the World Bank have “structurally adjusted” (impoverished and controlled) countries across the developing world.
Greece is hated for the same reason Yugoslavia had to be physically destroyed behind a pretence of protecting the people of Kosovo. Most Greeks are employed by the state, and the young and the unions comprise a popular alliance that has not been pacified; the colonels’ tanks on the campus of Athens University remain a political spectre. Such resistance is anathema to Europe’s central bankers and regarded as an obstruction to German capital’s need to capture markets in the aftermath of Germany’s troubled reunification.
In Britain, such has been the 30-year propaganda of an extreme economic theory known first as monetarism then as neo-liberalism, that the new prime minister can, like his predecessor, describe his demands that ordinary people pay the debts of crooks as “fiscally responsible”. The unmentionables are poverty and class. Almost a third of British children remain below the breadline. In working class Kentish Town in London, male life expectancy is 70. Two miles away, in Hampstead, it is 80. When Russia was subjected to similar “shock therapy” in the 1990s, life expectancy nosedived. A record 40 million impoverished Americans are currently receiving food stamps: that is, they cannot afford to feed themselves.
In the developing world, a system of triage imposed by the World Bank and the IMF has long determined whether people live or die. Whenever tariffs and food and fuel subsidies are eliminated by IMF diktat, small farmers know they have been declared expendable. The World Resources Institute estimates that the toll reaches 13-18 million child deaths every year. “This,” wrote the economist Lester C. Thurow, “is neither metaphor nor simile of war, but war itself.”
The same imperial forces have used horrific military weapons against stricken countries whose majorities are children, and approved torture as an instrument of foreign policy. It is a phenomenon of denial that none of these assaults on humanity, in which Britain is actively engaged, was allowed to intrude on the British election.
The people on the streets of Athens do not suffer this malaise. They are clear who the enemy is and they regard themselves as once again under foreign occupation. And once again, they are rising up, with courage. When David Cameron begins to cleave £6 billion from public services in Britain, he will be bargaining that Greece will not happen in Britain. We should prove him wrong. 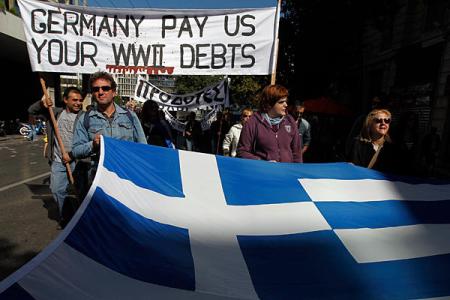