Lance Gowland, Skipper of Eureka on the way to Nauru with the Flotillas of Hope.

On Saturday, November 22, a celebration of Lance Gowland’s life was held in Sydney. He was a proud 78’er for Gay Liberation risking life and limb for the rights of LGBTQI people. I couldn’t go because of my broken leg but I did send some photos and and some words to be recited as the photos appeared in the appropriate space of Lance’s life in the slide show.

I first met Lance when he answered the Call to Action, for the Flotillas of Hope, to bring hope to the refugees imprisoned on Nauru. He wrote me an email saying he had a boat and he was willing to sail it to Nauru. For him very simple words to utter, but for me, they were miraculous sounds that further crystallized the dream of going to Nauru. Now we had at least 2 boats – Eureka and One Off in Brisbane. When the Call to Action was sent on its email trajectory, there were no boats, no money, no technology, no crew. All there was, was a dream quickening into life any time someone offered some support for the dream to manifest.

Lance also asked me later on the phone if there was another experienced sailor that was going on the trip to Nauru. He wanted to know because he had a terminal illness and he didn’t want the people like me who had never sailed, to be stranded out in the deep blue ocean with no way of returning to Australia. He also asked me to not say anything to anyone about his condition until we returned safely.

Luckily I could answer with a resounding YES! 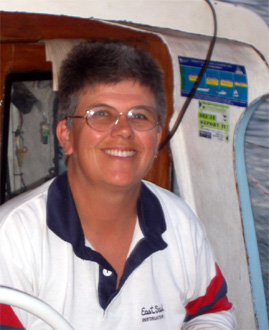 Ruth Boydell, a Maritime Teacher at Newcastle TAFE, was not only an experienced sailor who had sailed solo from India to Australia but was also a TAFE teacher of sailing and other maritime esoterica. Ruth and I both work in TAFE at Newcastle. I work in Multicultural Education.

The words below were recited on 22 November, 2008 at the Celebration of Lance’s Life.

It was a windy night, the Southern Cross flag flapped behind us, we the crew of Eureka, sat listening to Lance telling us the story of the Eureka Stockade. We were about 400 miles away from Nauru out in the deep blue without any certainty that we would arrive safely and even if we did whether the Nauruan people would greet us peacefully or with the Australian Federal Police armed with their guns.

The Southern Cross flag on Eureka. Photo taken on the night that Lance told us the story.

After a short spell of silence, with the wind blowing, Lance with great feeling quoted these words from the Eureka Stockade:

“We swear by the Southern Cross to stand truly by each other and defend our rights and liberties”.

For most of us, it was the first time we heard these words and on Eureka out in the deep blue, sailing to Nauru to bring hope to imprisoned refugees, hearing our Skipper, Lance say them, made it an unforgettable moment.

Lance, our Skipper, thank you for standing by me and the crew.  Thank you for your courage and generosity of spirit standing by the impoverished refugees who sought hope on Nauru.

You, Lance,  are a man who will live on in any action done by any person for the cause of social justice.

Since writing the above Australia has legalised Same Sex Marriage in 2017 and in 2018 the 40th Anniversary of the Mardi Gras was celebrated. Just before this ABC TV broadcast a documentary about the struggle for equal rights for gay people.

Mardi Gras named Lance Gowland the Father of the Revolution.