Caught up in a Duality – Within or Without Me?

Below is something I wrote a few years ago after bumping into a friend I hadn’t seen for a long time. The feelings expressed, I think, are just as relevant today as they were then, when I, along with others, was preparing for the Woomera Action in Easter, 2002 with Hope Caravan. Check out the Hope Caravan yahoo group by clicking here.

When I saw him yesterday, he seemed so at peace with himself. He was sitting in a half lotus with his bare feet crossing over each other on his sofa. The mandala tattoo just above his ankle balanced with the diamond shaped crystal dangling from his neck. We shared some green tea and he smiled gently as he closed the book before him.

He was an old friend, someone I hadn’t seen for a long while and in that time our paths had diverged. He found spiritual bliss and I found more reasons to struggle for peace. He found inner peace, so he told me, whereas I found inner warfare, so I told him. His holy war had been won, mine had just started as it had done so continuously for a long time.

He was referring to the fact that I had asked him to join me in action, an action to support those who cannot speak or act for themselves because of their current circumstances. I asked him to join me and others to act in support of the refugees imprisoned in the concentration camps of Australia. In particular, to join others in the Festival of Freedoms at Woomera in Easter, 2002.

I replied, “But what if my self is larger than that circumscribed by my skin? What if my self includes the whole planet? In that case when I see suffering and injustice outside of my body, then it is still within me.”

He laughed, “Well, in that case your ego is bigger than mine!”

He adjusted his posture by letting go of his half lotus and allowing his leg to fall straight down over the side of the sofa. He leant forward placing his elbows on his knees and his dangling crystal now swayed like a pendulum between us.  Incense smoke spiralled upwards from the joss stick burning on the coffee table before us.

I could see his point but somehow it still didn’t feel right. I said, “Ego, big or small is always going to be here. Tell me what do you do if you see your neighbour’s house burning down? Do you say that your house is OK so why worry about your neighbour’s?”

“I would immediately help extinguish the fire. For me the plight of refugees and wars on the other side of the planet are things I can’t do anything about. I aim for inner peace through my meditation and this in itself will do far more for the refugees and war than anything your protests and actions will ever do. Why? Because I am changing myself, I recognise that all true change must start with my self. Your protests and actions add more ‘noise’ to the whole situation. Create an oasis of silence and peace within yourself. This will have far more impact than going out on the street or facing the razor wire of the camps. Change yourself – that’s all you need to do!”

He took another sip of his tea and stared me in the eyes…. or was he staring at the point between my eyes in my forehead, the so called third eye? I couldn’t tell except that I felt a certain intensity of effort from his gaze, that he was trying to change my perspective by using subliminal energies directed at me. Of course, he was kidding himself if he was trying to do this.

Yes, our paths had diverged. While I saw that it is important to work on one self and to recognise that what goes on inside, behind your eyes, affects what goes on outside oneself, I also felt that one could not just rest in one’s relaxed navel and allow others to suffer. Can one carry the “oasis of silence” found within to external places of sorrow and injustice, to share the peace? I asked myself. 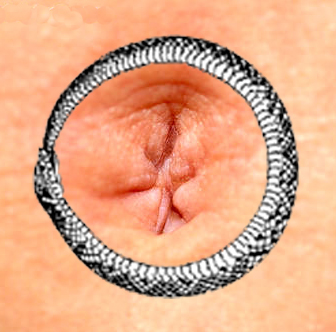 Ouraboros resting on a relaxed navel.

I met his gaze and then wondered if it was within or without me as I walked away.

“The darkest places in hell are reserved for those who remain neutral in times of moral crisis.” – Dante

“Our lives begin to end the day we become silent about things that matter.” Dr. Martin Luther King, Jr

This entry was posted on Saturday, January 3rd, 2009 at 5:35 am and is filed under hope caravan, human rights, personal, philosophy, politics, Woomera @ Easter 2002. You can follow any responses to this entry through the RSS 2.0 feed. You can leave a response, or trackback from your own site.

3 Responses to Caught up in a Duality – Within or Without Me?