This is the title I used for an article published in  “Education Australia”  way back in 1998. I think it is still relevant in many ways, particularly now that Australia has had a change in goverment. Since it already is online I will just give you the link to it here  “A Ganma Odyssey” . If the link should ever become inactive I will upload it to this blog.

I chose this title to connect an Aboriginal word with my Greek heritage – the Odyssey. Ganma is an Aboriginal word from the Northern Territory which is the name for a waterhole that has fresh and salt water mixing together in a rock pool. One of the speakers at the conference (see below “The Ganma Metaphor”), suggested we use the word “ganma” to refer to a “multicultural space” as in a classroom. Anyway, read the article and you will see the full context. By using the word “odyssey” I alluded to my own Greek heritage and the fact that the journey to the Heart of Australia was also a journey to the centre of my own heart because I was retracing a journey I undertook about 25 years earlier as a young man on the road looking for truth . . . . my own naive version of a Dharma Bum.

The coloured text excerpts and photos, beneathe “The Ganma Metaphor” are scanned from the hard copy of “Education Australia” Issue 39, 1998. So, check the article out >> “A Ganma Odyssey”.

“This metaphor I had learned during earlier visits to Yirrkala Community School in East Arnhem Land, on the coast of the northeast corner of the Northern Territory. Yirrkala has organised their curriculum and teaching around a metaphor of the contact zone where rivers meet the sea, named ganma in one of the local Aboriginal languages. Literally, ganma is where fresh and salt water meet. Metaphorically, ganma is where cultures meet: fresh water is indigenous Yolngu knowledge and practices; salt water is the white Balanda knowledge and practices; and one place where they meet is in school.

Flying in a small plane from Yirrkala west to Darwin after a visit in 1993, l could see clearly the swirls of different colors in the ganma waters: bluer from the sea, browner from the land. Manduwuy Yunupingu, who was principal of Yirrkala when I first visited in 1991, has also described the role of Yothu Yindi, his internationally known rock group, in the meeting place of popular culture in these same ganma terms (Shoemaker 1994).

At first thought, this ganma metaphor may seem to ignore the important power differential between dominant and nondominant cultures in institutions like schools. But if you think again about literal relationships between fresh water and salt, the potential threat of unequal power is there: salt water tides and typhoons can flood the land, while fresh water cannot seriously harm the ocean. But if the two can be kept in balance in the ganma space, then the rich nutrients that come together from the mix of different waters nourishes richly diverse forms of life-biologically in the literal situation, culturally and intellectually in the metaphorical.”

Quote from ‘A Postscript from Alice Springs’, in Multiliteracies: Literacy learning and the design of social futures. 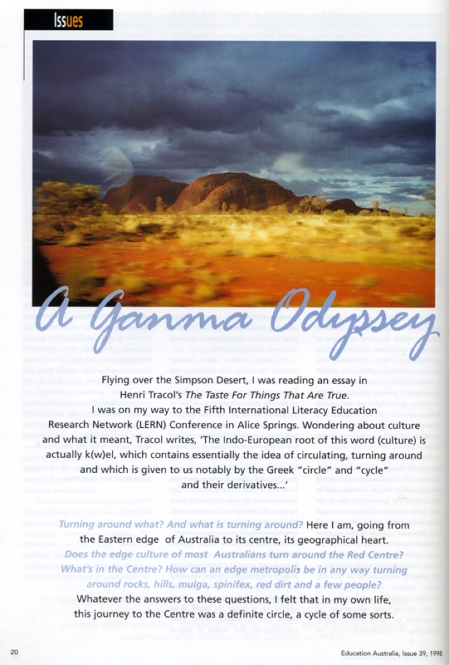 Here is an excerpt from the article :

It has been suggested that the human notion and definition of self has been through major shifts since the beginning of human consciousness (Julian Jaynes, “The Origin of Consciousness in the Breakdown of the Bicameral Mind”, Boston, Houghton Miffen, 1977 ). The closest to us historically, that may demonstrate this shift, is said to have occurred in Homer’s Greece.

According to this view, in Homer’s day, the people did not have the same sense of self as we may have. Their inner psychological organisation was different to what we take for granted. The voice of the mind was somehow perceived as a “god” speaking from outside themselves. It didn’t take too long before people started sussing out that there were a lot of “gods” running around in the temples and in the marketplaces saying contradictory things about how things were, that they saw the untruth of their “godhood”. Gradually this voice of the “gods” became established in the sense of self we call “ego”. What was there before the voice? Who and what was Ulysses’s “sense of self” on his Odyssey?

Have we in the dying years of the Industrial Age, come to a cultural cul-de-sac? Somehow, we have alienated ourselves from not only each other but also the common ground of experience – nature, the Earth. Is it time for another definition and sense of self, another way of knowing, one that acknowledges something other than the sovereign rights of the mechanistic, rational, technocratic and anti – spiritual mindset of the “Western” sense of self?

Edward de Bono in his “I Am Right, You Are Wrong”, thinks that this is the case. He suggests that a renaissance of thought and language patterns is needed so that humanity doesn’t self destruct. He proposes turning away from the “table top logic” of the traditional “Western” mindset in favour of developing a way of knowing that is based on perception. De Bono explains that recent developments in the understanding of self-organising systems and ideas from information theory, have given indications as to how the neural processes of the brain perform the activity of perception. Perception operates in nerve networks like a feature of a self-organising biological system, a living entity. Let’s call information that comes through our senses impressions. These impressions fall on the inner landscape of our mind like rain. The rain on the mind organises itself into tributaries, rivulets and streams of temporarily stable patterns. These patterns can subsequently flow into new sequences and patterns. According to de Bono, the perceptual mode of thinking encourages the mind to form multiple branching flow patterns; the sensory information is not boxed in by fixed linguistic concepts, generalities, and logic. Perceptual thought patterns follow the natural behaviour of neural networks; our present mode only plays back a recording of words and concepts provided by a preestablished cultural mindset.

Courtney Cazden during her paper on Ganma Space spoke of the necessity of getting rid of the margin and centre metaphor. This metaphor was based on the myth of terra nullius of students’ minds and being. Courtney told us that while she and Mary Kalantzis were flying to some school in the Northern Territory they noticed water holes that had fresh and salt water tributaries and other smaller rivulets all feeding the main space of the water hole. This, they found out was known as a ganma. The ganma looks like localised swirling spirals from the air. Courtney said that the mingling of brown, fresh and salt water in this space was analogous to the culturally diverse classroom. And in light of the process of perception is an apt image of the inner subjective world, our mind, our being.

The multicultural classroom as a Ganma Space, this metaphor rather than create separate marginalised groups besides the mainstream, recognises the primacy of all the diverse groups’ backgrounds and experiences. There is no one central dominant culture enforcing a mainstream reality. There is an influx of different cultures, different literacies, different world views, a swirling waterhole, a turning of bracken water whose salt has not lost its savour.

Let’s go one step further and consider that in the industrially developed world there is the primacy of the head, (some localise it to the left hemisphere of the brain) and all the other ways of being and cognition – feelings, sensations and intuition have been marginalised. What do we have if we apply the ganma metaphor to our own inner world? In this ganma, head, heart, body and spirit all contribute equally, but differently, to our sense of the real. These parts of ourselves may all be cognitive in nature, they may be different tributaries of knowing, different source data. Ganma Space taken as psychological space, the internal world of our experience, would allow for the possibility to connect our known and unknown parts of ourselves. This opens the opportunity to connect with others by being able to include more of the “other” in one’s awareness.
Could the perceptual mode of thinking be a ganma way of knowing?

The taste I seek is a taste of being – not in the philosophical sense – a point of view to be debated, but rather an experience, an immersion through the background/underground of one’s chattering monkey mind – into the moment. We’ve seen that working from only a part of ourselves doesn’t work. The problems confronting all of us in this time of planetary transition are whole systems oriented. Now we see through Chaos theory, that a butterfly fluttering her wings in South Africa has global consequences. And when it comes to the ecological state of the Earth and the widening gap between the rich and poor across the planet, it is obvious that whole, global issues require an effort and a response that is from the whole of ourselves, the ganma of ourselves.

From “A Ganma Odyssey” published in Education Australia, 1998. 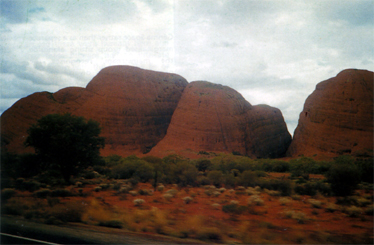 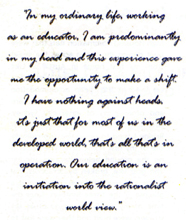 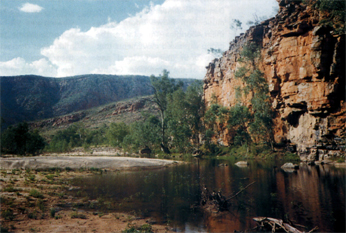